It's just a day trip. 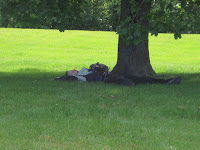 Picture - Rest Area in VT - We'll want that tree later!
Thinking about riding across the country for 5 weeks can be daunting. The only way to manage it is one day at a time. And that is what we did yesterday as we set out. We just went for a Saturday ride.
We stopped for breakfast at the Foothills in Warner, NH, my favorite country breakfast spot.
We ran into a trio of Harley’s from Tenn. They didn’t seem to want to chat with us.
The customs man made me turn in the pepper spray that Kevin gave me. I had clipped it to the outside of my tank bag. As I approached customs it occurred to me that it might be a problem, but decided that hiding it might not be a good plan. We learned that it’s not legal in Canada.
I have no idea what we are paying for gas in Canada. There are far more pay inside stations, I almost forgot to pay at one of them. I was sipping my coffee staring at the pump when it occurred to me…oops.
Lisa couldn’t understand why she felt so tired doing nothing. Music helped out.
We don’t have communications. A pin on the Bluetooth Interphone bent and broke. I must have used too much force trying to put it in. That was more than disappointing. Kevin is going to try to get them to overnight a replacement part.
Traffic was brutal in Montreal. I should have listed to myself and avoided the area. It was only 3 very hot miles of stop and go and if that’s the worse we see, then we’re doing ok.
We’re heading to a friends house in Sudbury, ON. A fellow guest warned me about construction, but was encouraged that it should be ok on a Sunday. It’s only about 6 hours, so we’re lazing around this AM, waiting for brunch to open.
Posted by SheRidesABeemer at 6:35 AM

Gail, did the Canadian Border Patrol really take your Mace, or did you spray those Redneck's from Tennessee for being unfriendly?

Broken Bluetooth? Dang, that sucks! Didn't take long for something to go wrong, did it? Hopefully Kevin's shipment will arrive soon.

I'll be reading your Blog, Gail, and am looking forward to following your adventure!

Congrats and be safe you guys! How's Lisa's butt doing? No reason a gel pad couldn't be rigged if needed. Even on top of the seat with some fabric covering it and fabric tucked under the pan to secure it.

We took off the gel pad, the Corbin is better for her. No complaints really, just a little cramped legs after 11 hours! But no kidding!
Word from Kevin is the Bluetooth is being shipped to him and he'll get it out to us. Lisa and I have never used it, so she's not missing it.